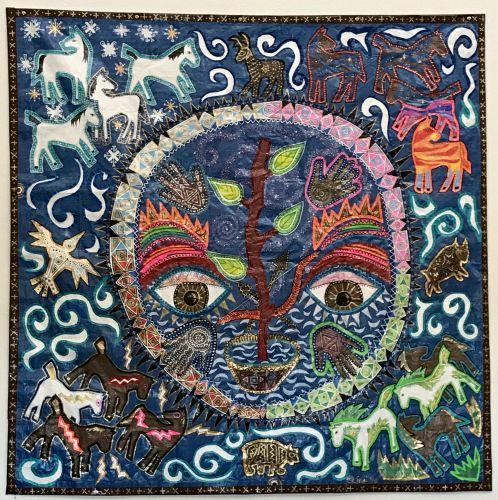 By melissasasichambersJanuary 22, 2017April 6th, 2019No Comments

This tarpage, “Great Circle of Life,” was inspired by the fevered vision Black Elk had as a 9 year old boy. He saw spirit horses galloping from the four sacred directions — from the west snorting lighting, from the north swirling in snow, from the east glowing like morning at dawn with starry eyes, and from the south with manes flowing like prairie grasses. As the horses vanished a firey rainbow arced above him and he saw six ancient grandfathers who gave him gifts of power — a wooden cup of water with the power to give life, a bow and arrow with the power to destroy, a red stick which sprouted four green leaves representing the tree of life — which would flower if all people shared the vision. Black Elk was just a little boy when he had this vision and it took a long time for him to have the courage to share it with his people. When he finally was able to share it, a ceremonial tipi was set up and images from his vision were painted on it.

Imagine this tarpage is like the material that tipi was made from, and the images on it are like those which were painted on that tipi. And the eyes? Black Elk’s. Mine. Yours. May we all share the vision.