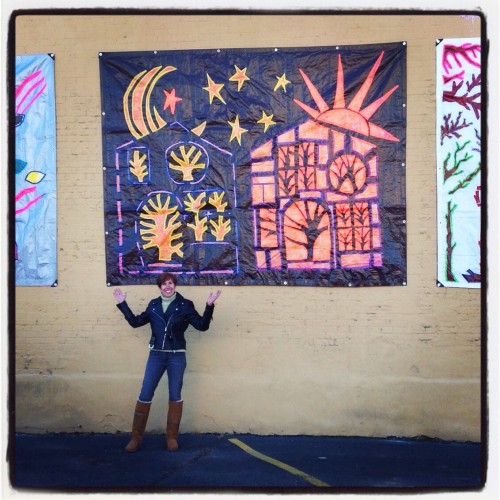 The Tarps Picadas are an ongoing and ever evolving series of artworks created from 8′ X 10′ polyvinyl tarps, duck tape, and in their “second life” versions, the addition of Sharpie and paint pen graffiti. Images of the tarps are featured in my portfolio on the Public Art, and individual Surface Pattern Design pages.

This page in my website is meant to serve as an abridged overview of my process which began as a public art commission and has evolved for me into a new art medium. If you are interested in reading the entire saga of the Treefort Tarps Picadas you can do that here.

In January 2014 I was commissioned to produce a work of ephemeral outdoor public art by the City of Boise, Idaho, highlighting the 2014 Treefort Music Fest that March.
My proposal was to create a large installation resembling a banner of papel picado, using polyvinyl tarps. I created a mock-up of the installation using cut paper images which were then photoshopped onto a picture of the site.

I used individual cut paper images like these in the mock-up:

8′ X 10′ polyvinyl tarps come in a limited array of colors — blue, brown, white, and silver.
So in order to create the variety of color I wanted in the series I spray painted white tarps — orange, yellow, hot pink, purple, and red using a “plastic fusion” paint.

The process for each tarp was then to cut out the design from the top tarp, staple the top tarp to a different colored bottom tarp, and then tape the borders of each of the cut-outs with duck tape in a variety of brightly colored hues.

My living room became my “studio” for the duration of the project because my real studio was too small to spread out a fully opened tarp and be able to work around it — or I should say ON it.

The installation of the tarps on the outside of a popular music source and venue for live in-store concerts — The Record Exchange, in Boise — was the next step.

Or so I thought. 24 hours after the installation, Boise had an usually powerful windstorm with 60 mph winds. The tarps were hit hard. We rushed to take them down as quickly as possible before they were completely destroyed.

One of the tarps, “Treefort Blues” was to be featured on the cover of the Boise Weekly, two days after the windstorm. I had no choice but to work around the clock in the little time I had before publication, and get the tarps, which were not completely destroyed, repaired and rehung. And so I did, finishing the rehanging the morning the Boise Weekly was delivered.

These are the Treefort Tarps Picadas, as they were before the windstorm, starting with “Orange You Glad”

“Treehouses of the Rising Sun”

The Tarp Picada installation stayed up for 6 months, until the weather — which now included 100 degree sunny days — began to take its toll in a more marked fashion. We took everything down for good the end of August 2014, and I then began to think in terms of the tarps’ “Second Life.”

The tarp “Treefort Blues” was sold in the Boise Weekly Cover Auction, and the tarp “Red Tree” was cut up and used in a smaller tarp I created for exhibition in the Treasure Valley Artists’ Alliance exhibition, “Foray IV – Pushing the Envelope.” That tarp was retitled “Deja Vu All Over Again.”

Creating this piece inspired me to take the remaining tarps and play with the same process I used on “Deja Vu All Over Again,” which included once again re-taping where the duck tape had peeled off, and then drawing all over the entire surface of the tarp with black Sharpie markers and acrylic paint “pens.”

Below are each of the 4 remaining original tarps followed by detail shots of their “Second Life.”

“Treehouses of the Rising Sun”

The use of nonstandard materials — polyvinyl tarp, duck tape, Sharpie markers, combined with the graffiti patterning over the weathered painted surface gives these pieces the feeling of Outsider tapestries. Or maybe Ethnic Art Brut wall hangings. They are informed by street art as well as traditional African, and Australian Aboriginal motifs, but are in the end, unique pieces unto themselves.