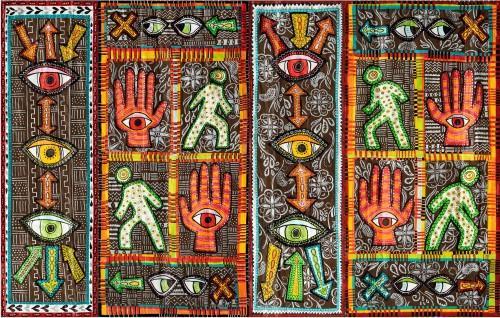 In honor of the collaboration TVAA has enjoyed with Boise State Public Radio since 2010, all the exhibitions in 2016 will feature themes based on programs aired by NPR and BSPR.

The first in the series is titled “This American Life,” and for my submission I entered the Tarpestry I made for the HAWK Pedestrian Crossing Box on the corner of Edson and Curtis in Boise, titled “Walk, Don’t Walk.”

This Tarpestry was inspired by the Boise International Market (which burned to the ground in 2015), and is in a neighborhood which is home to many families new to America. Many of those residents are refugees.

Below is the Tarpestry in it’s entirety.  The photo above is of the edited piece which will be used to create the digital printout on the skin which will “wrap” the traffic box itself.